The store will not work correctly in the case when cookies are disabled.
Menu
Account
Home
Articles
Blog
Mr. Rogers Most Important Business Lesson

IT'S A BEAUTIFUL DAY IN THE NEIGHBORHOOD...

If you’re of a certain age, it’s probably a good bet that much of your early childhood was spent watching a nice, older man invite you, his neighbor, to spend a day in his neighborhood. Every show would open with him walking through his front door, kicking off his shoes and putting on his trusty cardigan sweater.

Yes, I’m talking about Mr. Roger’s Neighborhood, which aired on PBS from 1968 to 2001. Fred Rogers was a pioneer in children’s television…someone who kids looked up to, someone who they trusted, someone who told them they were fine just the way they were. He introduced us to his friends, King Friday XIII and Daniel Striped Tiger. He showed us how an oboe was made, how movies were made, and how the mail got delivered. The lessons he taught about friendship, sharing, and the big, wonderful world around us shaped a generation.

But one of the most important lessons Mr. Rogers taught wasn’t really meant to be a lesson at all…or at least, one that wasn’t known until years into the show. 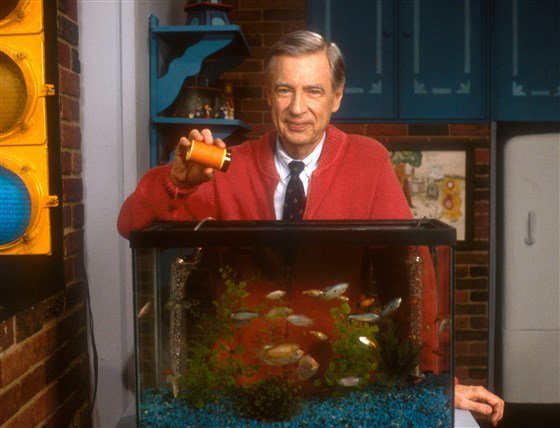 TIME TO FEED THE FISH

If you watched Mr. Roger’s, you knew that in every episode he’d look straight into the camera and tell you that it was time to feed his goldfish. However, in early episodes of the show, he’d walk over and feed the fish while talking about something else. He’d grab the small shaker of fish food and causally drop a few flakes in the fishbowl while talking about his day or what he was going to do when he went outside. He always fed the fish…but he just didn’t SAY he was feeding the fish. Until he got a letter from a little girl that changed his show.

In today’s business landscape, I’d argue that this is Mr. Rogers most important lesson for businesses. Sometimes we take for granted that our customers know what value we bring to the business/customer relationship. Whether it’s how you take an extra moment to pack an award to make sure it doesn’t break when you ship it, or that one extra swipe with a cleaning cloth before handing a customer a sign, be sure to show them that you’re doing everything you can to make sure they’re happy with their purchase. But how do you TELL them you’re doing this without sounding like your bragging?

One easy way is to put a few simple check boxes on an invoice or packing slip. One could say “packaging check” and maybe another could say “item cleaned and inspected”. Another thing you could do is insert a very simple “thank you for your order” card that you put in the box, and have you or one of your employees sign it. Whatever you choose, you’re telling your customers you’re taking care of their order and going the extra mile.

Remember to let your customers know that you’re “feeding the fish.”

Fill out the form below to receive a weekly email containing the latest blog posts from Johnson Plastics Plus.