The store will not work correctly in the case when cookies are disabled.
Menu
Account
Home
Engraving: Nosecones

Welcome to the JPPlus Resource Center!

Once the correct cutter and spindle have been determined, a proper nosecone for the job must be selected. The nosecone is the plastic or metal part of the engraving spindle that will touch or ride over the material surface while engraving. You may ask, “Why use a nosecone at all?" The reason is simple: Of all the different methods of cutting there are to choose from, using a nosecone will produce an engraver's most desired result - a consistent depth of cut. Due to the shape of the cutter, deeper cuts will result in wider letters and shallow cuts will result in narrow letters. If this occurs in the same job the appearance will be unsatisfactory.

Engraving, unlike machining operations, takes advantage of the use of a nosecone to control the depth of cut. Several factors can negatively influence the depth of the finished engraving and the resulting letter quality:

Figure 3.8 illustrates the part the nosecone plays in the engraving process.

To control the depth, engravers have a choice between two basic styles of nosecone: screw-on or drop-in. Each style could be made of either plastic or metal.

Metal nosecones of either the screw-on or drop-in variety are very durable and often are included as standard equipment with many engraving systems. They're good on most plastics and other hard surfaces. 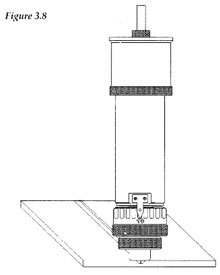 Plastic nosecones are preferred when marring of the material surface is a concern. Usually these are confined to use with plastic engraving stock that has a satin or brushed finish.

Finally, remember when selecting the nosecone to pick one with a large enough diameter and correct shape for the job. Selecting a nosecone with a large enough diameter is important so that it does not fall into the previously engraved area (Figure 3.9). You can see the depth control problem you would have if the nosecone dropped into the existing engraved letter. This is generally only an issue if you are doing large letters or signs where the background area must be routed out.

When working with convex or concave surfaces, a large nosecone on a slightly curved surface (Figure 3.10) will contact the object at some point and probably scratch the surface. A narrow, tapered nose (Figure 3.11) will more closely follow the contour and travel without interference, giving you the expected result. 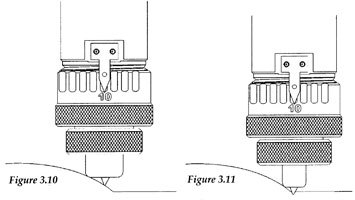